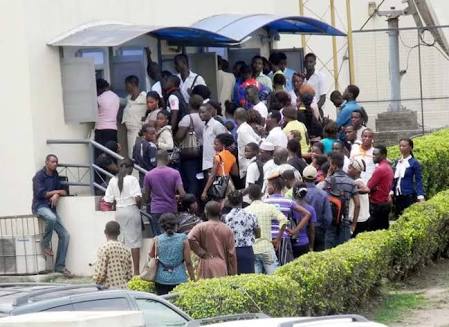 Operatives of the Rapid Response Squad of the Lagos State Police Command have arrested a suspected robber, Gbenga Babatunde, for allegedly robbing some residents of the state.

The police said the 25-year-old was arrested after a failed attempt to rob a woman who had withdrawn money from an Automated Teller Machine point in Alaba Rago Market, Ojo, Lagos State.

The police allegedly recovered a locally-made shotgun with two cartridges from the suspect.

“We gathered that he was not alone. He had an accomplice, who managed to escape after the botched operation,” a policeman said.

The suspect reportedly confessed to the crime, saying he went into robbery about two years ago.

He said, “I have been in the crime since I met Samson (the accomplice) at a joint in Alaba two years ago. Since then, we have been working together. We have robbed about 35 people. What we usually did was to get to any ATM point by 4am and hide.

“As soon as our victims collected the money, we usually accosted them and would collect the money and escape. The largest money we collected was N40,000. Yesterday (Saturday), we collected N12,500.

“This morning (Sunday), we wanted to collect money from a lady and she ran away. We thought she had gone, not knowing that she went to inform the RRS. That was around 5am. They arrested me, but my partner escaped.”

Also recovered from the suspect was a First Bank MasterCard, belonging to one Iweka Christopher Uchenna, and a Diamond Bank debit card, owned by one Nkechi Esther Idoko.

The state Police Public Relations Officer, SP Dolapo Badmos, said, “The case has been transferred to the State Criminal Investigation and Intelligence Department.”

You Can’t Bully Me Anymore – StefflonDon Allegedly Opens Up On Split With Burnaboy, Slams Singer Over Wizkid

Elesin Oba, The King’s Horseman: My Character Had No Lines, Was Challenging Yet Surreal – Omowunmi Dada